Chola is one important film that has questioned the stigma associated with Virginity and purity of women. Set with very minimal characters the film gives a great impact. From outlook, it feels to be a story  of a  girl, who steps out of her village without her mother’s knowledge for a trip to nearby town with her boyfriend, to her surprise her lover is accompanied by a stranger – who instinctively seems to be a danger to her. In her return journey her instincts work and the biggest nightmares of a woman come true. Was awestruck with Nimisha Sajayan’s performance. Music and cinematography attributes the film so well.  Every shot adds meaning to the film. The film has more inner meanings to be perceived. Without seeking the second layer of the film it may not feel complete. Here is my take on how I have perceived the film.

Instincts and fear of women in this society

Most of feminine fear and her instincts of being careful in this society is associated with her body – She is afraid of her body being seen. Shame of women is placed in her body. On a wider note the film  just tells how female instincts and fears are chasing a women’s life in her routine right from using a toilet to using a changing room, the fear and instincts to be safe is just there, anywhere anytime to a woman. Set admist a scenic atmosphere, the film appears a visual treat but the silence and vastness of nature in contrast transmits us the instinct and fears of Janaki, so much so that you really can’t enjoy the scenic beauty rather feel the voidness along with Janaki.

Does purity of a woman  lies in her Virginity ?

Can we really seek purity in women? Is virginity a measure to seek a women pure ? You can see the director asking these questions throughout the film. Water is like an character by itself in the film. The film is set on a rainy day,  While being with her lover she is drenched in sea, both of her rapes happen when she is drenched in water. The purity of a woman lying in her virginity is questioned throughout the film.  Towards the climax when  she is sitting inside the water yet surrounded by Blood she comes out pure without any blood stains. The cross dissolved shots adds  so much depth to the meanings of the film. Like a spider web, though being freshly spawn Janaki is associated as old for losing her virginity but its that Janaki is like water, she is always pure. Being named Janaki, another name of Sita in the epic Ramayana where Sita is doubted about her purity. She is judged to be impure for being touched by Ravana.  She dies stepping into fire to show her purity. In that way even Rama is also a villan to Sita and her death. In that way Janaki in this film here can be associated with her too. 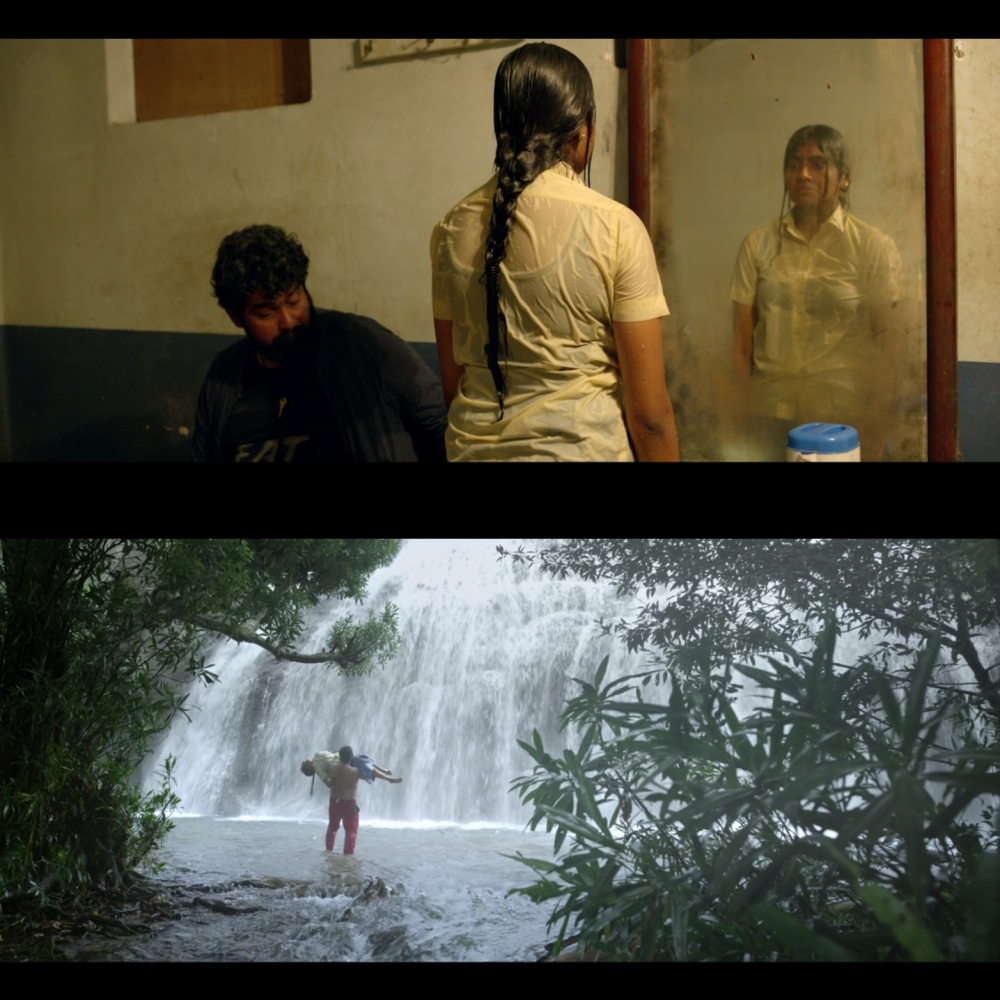 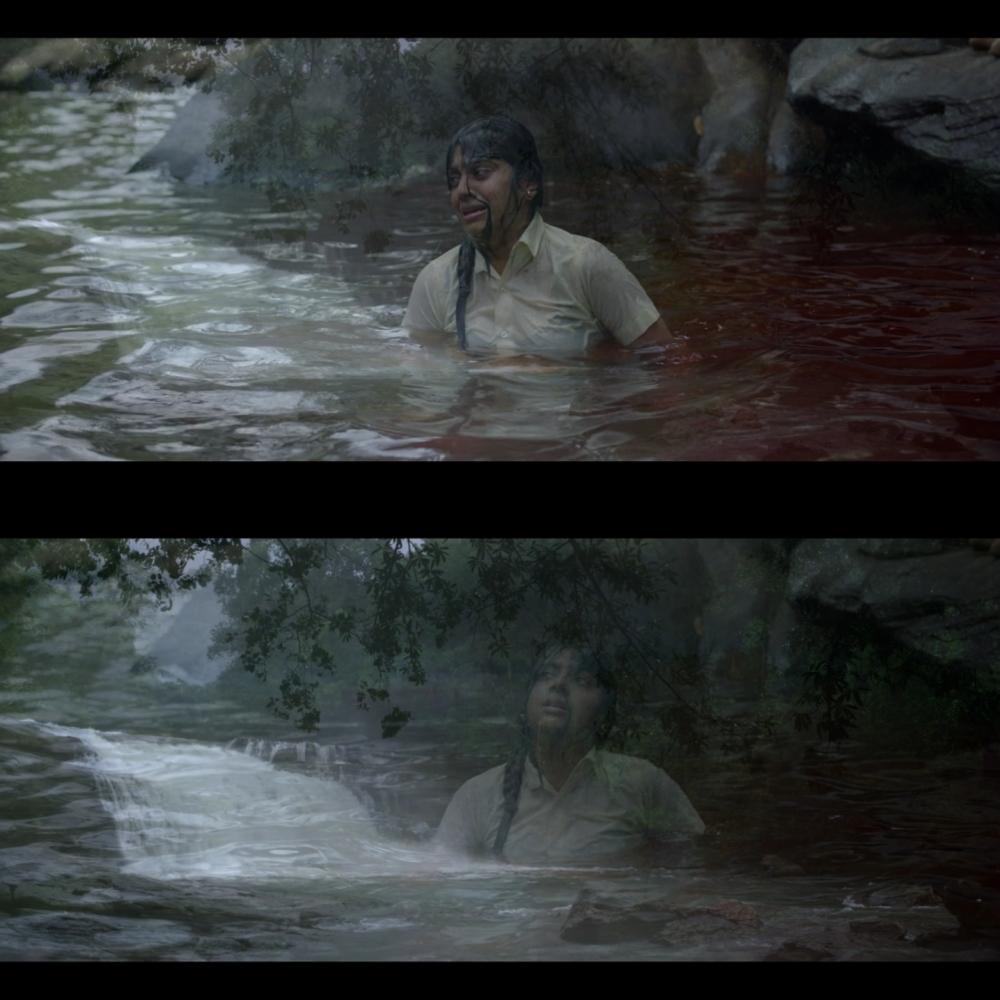 Is a woman a possession ? To whom does she belong ?

The zen Stones are personified with balance of nature is what I felt.  Janaki cant take up any more having been raped one side, with hopes on lover who will come to save her on other but he not even tries to oppose him.  He doesn’t oppose his boss  momentarily after getting to know she has been raped at first but only at second time he fights back, may be he feared of losing Janaki that’s why.  Here is where she becomes a possession.  Janaki loses her trust with lover, she loses her virginity to the boss, so she has to choose. I don’t feel her choice has nothing  to do with  Stockholm syndrome but it comes up with the ideologies of virginity that the society has fed upon her from generations to generation. Its just the way the film opens.

She loses her balance when her lover kills him to take his possession over her. Just before she kills her lover, a shot where the stones fall without balance is just the personification of What happens if the balance fails. The climax tells us how water has the power to wash out even the mountains. Zen stones and its philosophies tells the same. The English tittle Shadows of water gives a deeper meaning where water is flexible  yet has the power to washout the rocks. It is symbolised in a shot with a small ramp focus shift from Stone to Water.

The two men in the film are not just the characters associated to Janaki but a larger representation of oppression on women in this patriarchal society. Both lover and his boss are wearing a key like dollars – it felt to me like director is questioning Is virginity a lock to open it ? While both men have the keys it’s a fight for who does it first. His lover is weak while boss looks gigantic. My inner thoughts judge him for his weakness. It’s that the power of toxic masculinity that patriarchy also brings in. 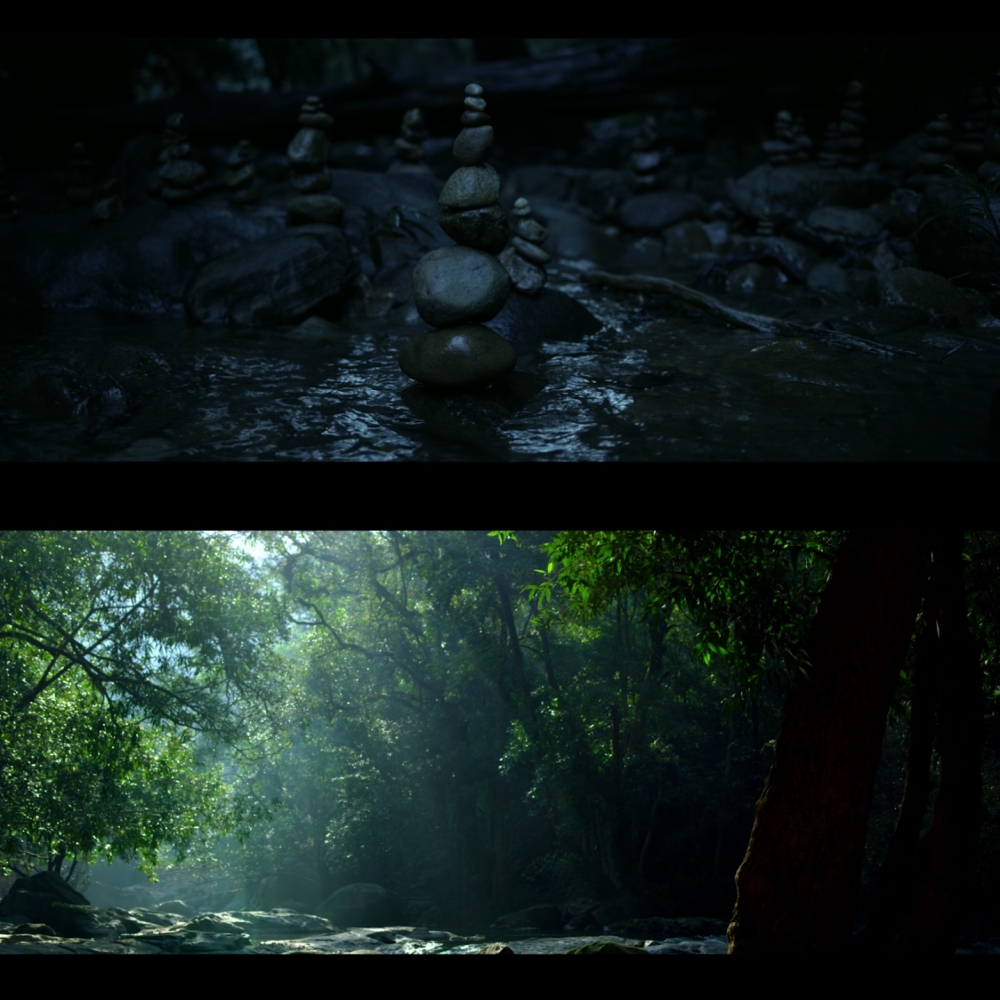 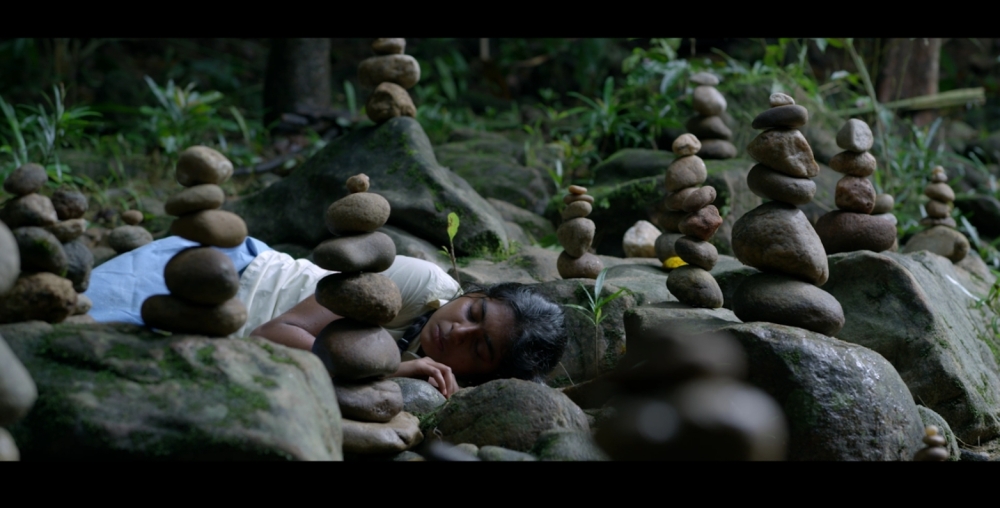 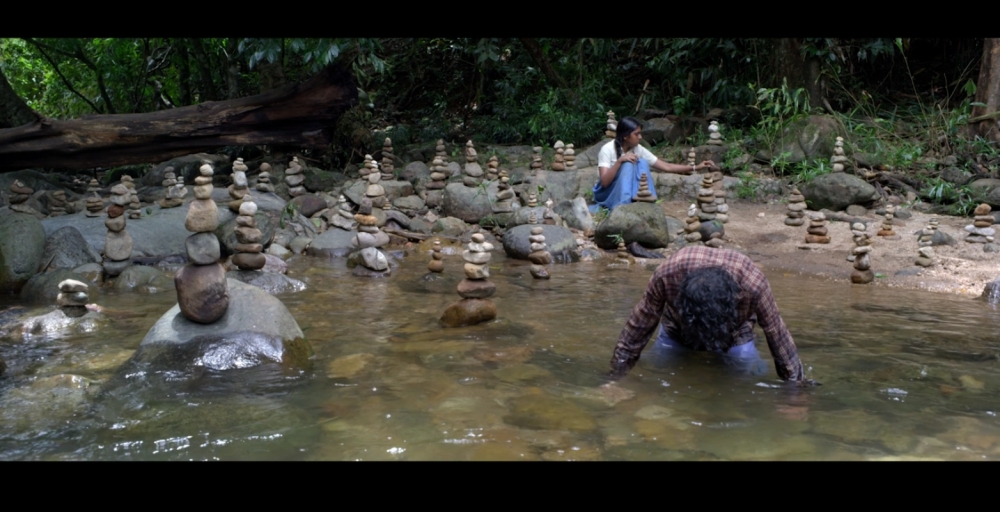 The stacked zen stones represents water, mind and body. May be the director questions if a woman belongs to her body or her mind ? It questions a woman’s purity and to whom she really belongs ?  It questions the dependency of women over men. You can see she lies all alone in the forest all night but never tries to escape out of her situation.  The director surrenders the question of whom does a woman belong ? to the nature itself. Even nature is trembled by that question may be nature is like a woman, its possessed, its controlled,  its exploited and by itself has the question to whom does this nature belongs to ?

Harshini SL I am a Passionate Traveller, Photographer and Film Maker. I feel Literature and Arts are the essence of life and I go by the verse "I Read, I Travel, I Become". Join my site for my Tales and Travels.